This is my entry for the A Game By Its Cover 2021 game jam! Unfortunately, I didn't manage my time very well, and then the submission time snuck up on me—I thought I had 2 more days!

Anyway, I intend to continue working on this game until it's finished, but for now, enjoy the rough draft music and the first 4 levels of the game! The final game will include more levels, more sound effects, the actual threat of the game (The Minotaur), and a special card type that teleports you 2 spaces in any direction!

But that's for later because I'm out of time right now.

Play using the arrow keys and the A, S, Z, & X keys, and use the "Help" screen from the main game menu to learn how to play.

The cover art chosen is Labyrinth Deck by Nat Morillo

I'll try to figure out how to get Itchio to let me give you the TIC-80 cartridge image with the source code as soon as I can, but for now it's just giving me trouble. You can access the source code from the browser player at the moment, though, if you're determined enough to look at my incomplete Lua code.

thank you for making this game!

i really like the idea and you worked hard on this demo.

i played this once and got to level 3 and it was hard  but fun!

and i like the difficulty as you take longer in the dungeon or level, monsters get spawned in, i love the choice of features for this card game dungeon crawler aspect.

i would like to recommend adding some item collecting that lets you reload your deck in case you ran out of cards, and reshuffling the deck, and maybe manipulation of getting more direction cards.

Thank you for playing! For the demo, I actually did reduce the number of cards in the deck, which I realize might have been a mistake—while developing, I was using a 68-card deck instead of the 40-card deck in the demo. I think going back to the original number will help a bit with the trouble of running out of cards. Either way, I think you're right; it would be fun to have extra cards lying on the ground that you can pick up to add to your deck, and maybe even have a deck refresh that re-shuffles your discarded cards into the pile!

In future versions of the game, I will be adding the Minotaur, which will move directly toward the player when the deck gets down to 15 cards remaining. When the Minotaur catches you, it's game over, so that will prevent the game from simply ending when you run out of cards. 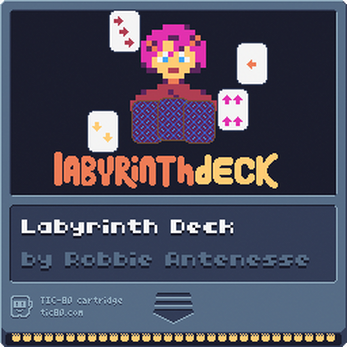